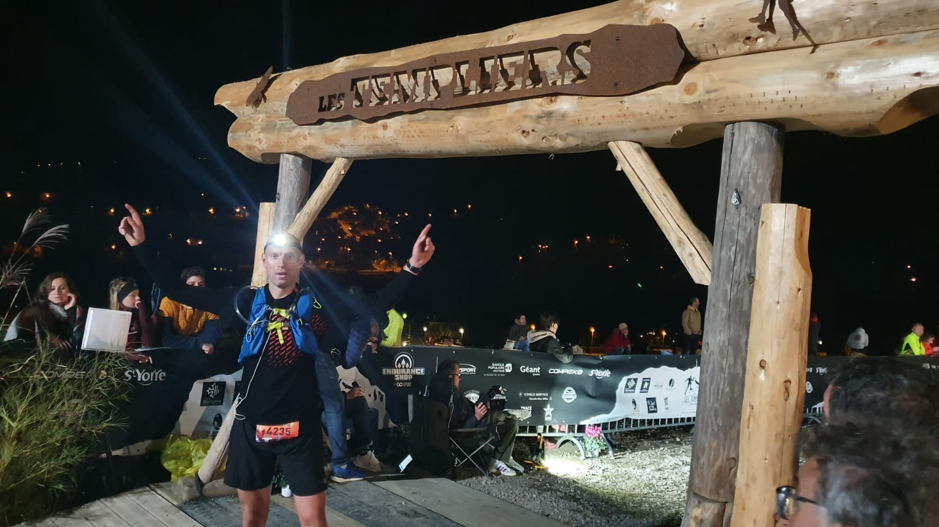 No more reasons to fear running a 100k

This is a blog on my experiences running the Templiers endurance trail on November 18th 2019. I’ll try to structure this unstructured account through the most frequently asked questions that where (and still are) being posed at me. I’ll try to answer those as serious as I can, but I’m afraid I can’t live up to the astounding level of : Should I Stay Or Should I Go?: And 87 Other Serious Answers to Questions in Songs. My advice: go check it out (https://www.amazon.co.uk/Should-Stay-Go-Serious-Questions/dp/0752266527) 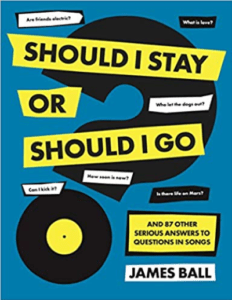 I’ve heard it many times beforehand and even more so afterwards: “100k, really? you’re nuts!”. Although this is probably true, I believe it doesn’t have so much to do with the fact that I have just completed a 105km run over the French hills (with 5300 meters of altitude difference). I completely agree that the sheer numbers looked pretty frightening at the time I signed up for this race. And the fear only got bigger leading up to race day on October 18th. But now that I’ve finished, all fear is gone. And believe me: fear is not necessary. It is just as non-functional as if you had fear of going to a public toilet… (this actually a real disease called paruresis – https://www.verywellmind.com/what-is-paruresis-3024879)

In many books or articles that claim to have the answers on the ever ongoing pursuit of happiness it is claimed that “investing in experiences, not stuff” or doing “activities out of your own ordinary” is a wise path to follow. Although my close friends know I have my darker moments, I consider myself to be happy most of the time. Nevertheless, I was attracted by the idea of a full day in breathtaking nature with all sorts of mental, physical and logistic challenges. I guess it was the idea of combining an intellectual puzzle with exercise (Hence my nerdy-job as an owner of the most advanced cost-modeling software: CostPerform, http://www.costperform.com). And, as always with me, it had to include some (long-term) goal. In this case a lottery ticket for the most historical footrace of all: “the western states 100” (http://www.wser.org). This race uses the historic western states trail and allows only about 350 participants to enter. To make sure that only those that really have a heart for this long-distance race will enter the race a rather complicated but mathematically brilliant lottery system was set up in which you have to run a qualifier to enter with one ticket. If your ticket gets drawn, you’re in, but if not, you can run another qualifier in the next year and then enter with two lottery tickets. My first qualifier was this 100k race, etc…And this race in France happened to be the most accessible for me to run. So I signed up without knowing how big an event the Grand Trail du Templiers is. As it turns out, it’s a whole trail running festival that lasts more than a week. And over 10.000 participants race in multiple races throughout the second week of November every year. 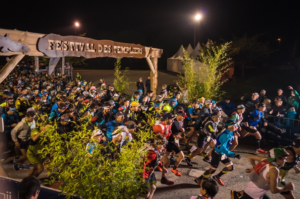 How do you prepare….?

Racing in these long-distance races provides complete new challenges: Starting and (probably) finishing in the dark, carrying enough energy and fluids, managing risks of injuries in the mountains and most of all: managing your mindset. How to make sure you will never glance at your watch thinking (“I have just finished a marathon, but damn I still have 1,5 to go…”). To prepare for this I followed a twofold strategy: A. Run as much in the mountains as possible and B. Read the science and literature on the subject. With respect to strategy A: Out of over 170 countries in the world I happen to live in the 3rd flattest country in the world. For those trying to find out the top 2: https://www.worldatlas.com/articles/countries-with-the-lowest-average-elevations.html

So much for mountain training. I had to stick to the woods and grasslands and the occasional hill in “het Leeste”. With regards to the literature I ready a very good book by Jason Koop “Training essentials for Ultrarunning”. Apart from training advice, 20 pages on blister treatments and how to avoid puking, it had a great section on choosing a crew. In this kind of races it is quite common to have a crew with you that helps with food preparation, blister treatments, gear transportation, etc. In some North American races it’s even allowed to have a crew member (pacer) run with you the last 20-40% of the race. But not in Europe. In my case I asked two of my neighbours to be my crew for this race. 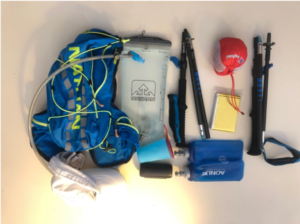 Yes! Both Bert Bergsma (living one door to the left of me) and Arno Willems (living right across the street) spend 3 days on the road with me. I lured Bert into this adventure by telling him the race took place near the village of Millau (often pronounced “miauw”). This village is mainly famous for the gigantic and beautiful viaduct of Millau. Bert had been there once before to visit the viaduct. After making the climb up to the viewpoint it turned out to be completely covered in fog… So I convinced him this could be his second chance. Arno was also easily persuaded: “How would he feel if he were to miss this neighbour-outing….?”. Apart from having affinity with sports (Bert used to be an Olympic level swimmer, Arno a little less than Olympic runner, but still faster than myself) these almost pensionados have a very important character treat that Jason Koop referred to in his book: “The best crew members only have a small amount of sympathy. After all it’s going to be tough out there, so it’s best to have someone in your corner who tells you to suck it up.” 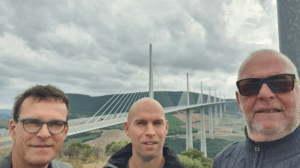 Are you alone in doing this?

The race starts at 4:00 in the morning and believe it or not, about 1250 other runners decided to join me. After being dropped off at the start on the back of the motorcycle by Bert we all departed with our headlights on. As usual with big races like these, I was super at ease and focused. It seems my busy mind is capable of super focus on the task at hand when it needs to be. I did however make some beginner mistakes… After 1km I was already extremely sweaty, so I had to stop and take of some clothes which put me pretty much in the back of the pack before the first climb. Being afraid that I would get stranded in the first very small uphill I decided that it would be a good idea to run a little harder… Sure, as if I didn’t have the next 20 hours to make up for this… The stupidity of this showed most on the first climb. When we turned right out of the main road after 4k to enter the mountains, all runners stopped running and started hiking immediately. With time to make up I thought: “Come on, this is just the start, don’t start walking already…!”. That thought lasted exactly 100m… With a heartrate over 185, walking didn’t seem so stupid after all… 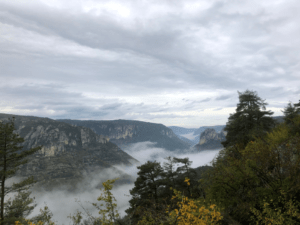 Nope. I lost 7 hours in comparison to the guy who won… This is pretty close to a full working day. On the other hand: I have seen so many people puking and having mental problems while I got through quite easily. I came in around place 350 in 18:25. I just kept running from aid station to aid station (6 in total) where my amazing crew would have a new camel bag with water and bottles with fluid energy drink ready. The time in between was always close to three hours, which I found ok to grind out. The only thing which was really irritating is the fact I was being overtaken by literally everyone on the descents. Uphill and flat: no problem. But as soon as the trail turned downwards the rest of the pack turned into speedgoats and left me turteling behind… 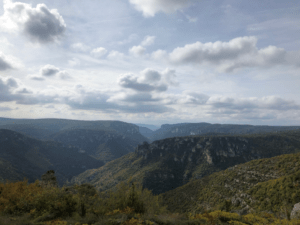 What where the darkest moments?

I never had really dark moments, although it deeply sucked from time to time. But knowing I would have Bert leading me into the aid stations where Arno would immediately start refilling my pack was always enough to keep going. It’s surprising how nice it is to meet your neighbours in strange places…

A definite low moment was the time that I realized my watch was showing 25% more km than the actual distance… This was around 60k. Furthermore, I often found myself stuck in a group uphill. Due to little space on the single-tracks it was almost impossible to pass. And more than once I started looking at those that were actually preventing me to continue faster. And the longer this would last, I started internally cursing those people. “Why are they in my way?, What an ugly set of shoes, Why use poles on this terrain” and the worst: “He/she is overweight, how is it possible that after 90km he/she is still walking in front of me…..”. But that’s also the beauty of the whole event. Size didn’t really matter. It is not the usually very thin male athlete that competes in these races. All types of body-composers where there. And equally talented and determined. 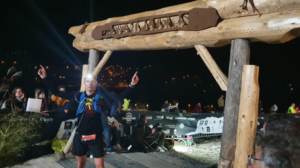 Would you do it again?

Definitely, it was actually not so difficult as I feared. Eat well, drink well, keep moving and never let negative thoughts enter your mind. I’m convinced that days like this can be done by almost everybody. It was just a long day of being in nature. All of you who have hiked know that after 3 hours or so, you’ll start to feel your legs. Well, the good news is: after six hours you are used to that feeling. And from then it is just a beautiful stroll over the mountains to the finish. Cut-off times are generally quite generous and the worst that can happen is that you’ll have to drop out. So what? Nothing to be afraid or ashamed of. Better luck next time and at least you enjoyed your day in scenic mountains. So let go of your fears and start running…

For those more visually oriented, please find a short video of the race, made by one of the neighbours:  YouTube

P.S. For those of you (wo read my previous post) wondering if I listened to Blof… Yes, I did (trying to replicate my superfeeling last time), but it lost it’s magic in comparison with last time…